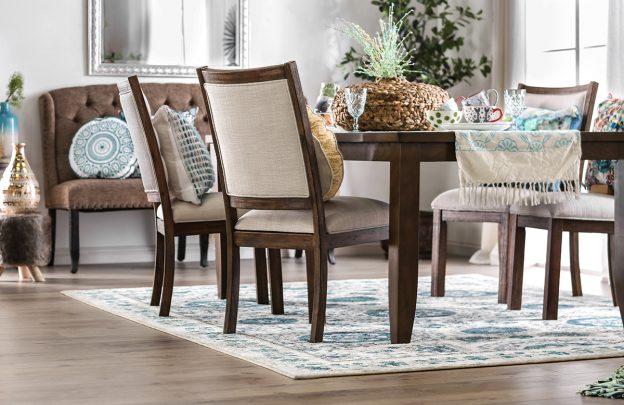 Chairs come in all sorts and sizes. They are fixtures in our daily lives. We’ve encountered countless examples of specific styles yet most of us would be hard pressed to “put a name to a face” (so to speak). If you’re among the unenlightened, allow us to shed some light on the mystery in plain sight – identifying these unknown entities you are undoubtedly already familiar with…

A look at the LADDERBACK

The most common chair during America’s extended Colonial period, the Ladderback design continues to enjoy popularity over two hundred years after its inception. It was named for its resemblance to wooden ladders, as the back consists of horizontal slats that are tightly attached to two corresponding vertical posts. They become the chairs’ back legs and extend to the feet. It is a classic example of Traditional-styling that serves both practicality and purpose.

Also commonly known as a “Crossback” chair, the ‘X’-back design is among the more versatile variety, finding appropriate uses in and outside of the dining room. The style reportedly dates back to early 20th Century France. Given its vintage association, the look remains very popular and is even employed solely as an accent piece. They are also particularly suitable for use in rustic and farmhouse-themed rooms – even in unfinished form.

With construction varying widely from simple to super-ornate, the Splatback always retains its general design. Between the left and right posts is a center piece that serves as the back support, extending from the seat to the chair’s top. It has been known to be used internationally during many periods and subsequently can be found in multiple themes, from gothic to Chinese. Despite these variants, it is considered an elegant design even in its most basic form.

Given the curved centerpiece’s resemblance to the outline of a violin, this close relative of the Splatback would forever be known as the “Fiddleback”. With origins traced to the early 1700’s in Southern New England, the form has become a fixture in furniture history. Though sometime constructed with arms, it’s most commonly seen without. It is particularly distinguished as being the primary influence for the classic Queen Anne design, introduced years after the Fiddleback’s debut.

Although commonly dismissed as a version of the Ladderback, or referred to loosely as “Mission style”, the phrase “Slatback” is in fact used to identify what is essentially the Ladderback’s counterpart. Instead of two or more horizontal slats, it features a vertical composition of them between two parallel posts (that account for the chairs height). A traditional rectilinear form, it’s a classic design that has become a furniture standard. In the modern age, it is incorporated most in casual and cozy settings, as opposed to its long history as an elegant dining room staple.

Whimsy of the WINDSOR

Of intricate design that absolutely demands solid construction, not only do the legs and arms dowel into the contoured seat, so too do any number of spindles. They are carefully curved by extreme heat via an organic craft used to create the chair’s form-fitting long back. Its top is dramatically arched, to best accommodate the average seated individual. The general concept traces back to its namesake of Windsor, England in 1710, but the design has long since evolved into its classic style, achieving and maintaining great popularity in the U.S.